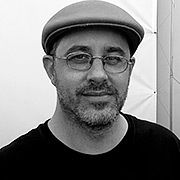 Mark Dedecker has worked as the lead character artist at Gentle Giant Studios and Ignition Entertainment, specializing in high and low resolution modeling and texturing for film and game characters. Currently a freelance character artist and Gnomon School instructor, Mark has worked on numerous films, games and collectibles. Some of Mark's work can be seen in Golden Axe, Iron Man, Species: The Awakening; and his digital double work has been on films such as The Hulk, 10,000 BC andThe Watchmen. Mark's bust of Spiderman 3's "Venom" was featured on the June 2007 cover of Toy Fare magazine. Mark graduated from Gnomon School of Visual Effects in 2006.