In this title, Josh Nizzi reveals his techniques for designing robots. He demonstrates his entire robotic design process, from sketching concepts in Photoshop® and creating a rough 3D model in 3ds Max®, to rendering the model in HyperShot™ and ﬁnishing the design in Photoshop®, Josh's approach is particularly valuable in a production setting because it enables the artist to deliver high quality concepts very quickly while simultaneously producing a proxy 3D model that could be used in pre-vis or as a starting point for a ﬁnal model. 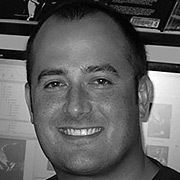 After graduating from the University of Illinois, Josh Nizzi was hired by Volition, Inc. to work on Red Faction 1, Red Faction 2 and The Punisher. Moving on to Day 1 Studios he worked on Mech Assault 2 and Fracture. Josh then became a freelance artist and has worked on feature ﬁlms such as Transformers: Revenge of the Fallen, G.I. Joe, Robot Taekwon V and Tarzan, as well as other projects for video games, comic books, toys and theme parks.