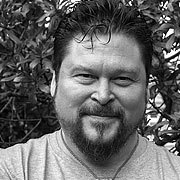 Gino Acevedo originates from Phoenix, Arizona, where his love of monsters started at a very young age. At 18, he started working at a Halloween company in Phoenix called Imagineering, where he designed Halloween masks and taught himself makeup effects. In his early 20s, he ventured to Los Angeles to work in the film industry for the next 10 years. In 1998, he was invited to New Zealand to work at Weta Workshop for the challenging task of helping look after the makeup effects on The Lord of the Rings trilogy, for which he took his vast experience to train and share with the team. Gino has subsequently worked on every major production to come out of New Zealand, and his role as Creative Art Director at Weta Digital continues his focus on cutting-edge design technologies. His credits include Alien 3, Death Becomes Her, Wolf, Men in Black, Independence Day, Godzilla, King Kong, The Hobbit, and the recent Planet of the Apes series.