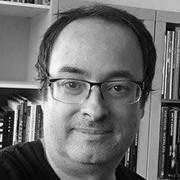 A childhood love of spaceships and robots led Miguel Martinez to study Engineering at the Polytechnic University of Catalonia, Spain, and later to pursue a career in Concept Design. After graduating, he made a promising debut when his short film Cosmonaut Koverchenko won several awards at the Imagina CG Animation Festival in Monte Carlo and secured him a position as an animator at Oniria Pictures in Luxembourg. Miguel’s strong ideation skills and love for working on core concepts prompted a switch to become Senior Specialist Artist/Animator and soon after, Senior Concept Artist at Guerrilla Games in Amsterdam. Miguel was a prolific contributor to the vehicular, environmental and mechanical designs of the Killzone series. Now a Principal Concept Artist, Miguel had a vital role in establishing the fundamentals for the world of Horizon. His approach to concept design, from an Engineering point of view, has translated into the impressive and functional robotic machines of Horizon Zero Dawn.