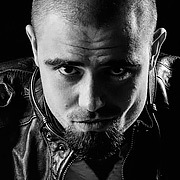 As a 3D character modeler for video games and game cinematics, Vitaly Bulgarov worked at Blizzard Entertainment on the cinematics team for Starcraft 2, Diablo 3, and the World of Warcraft franchise. As a concept designer for films, he’s created robotic designs for ILM, Dreamworks, Paramount, Lightstorm Entertainment and more, on projects including Transformers: Age of Extinction, RoboCop (2014), Terminator: Genisys, Ghost in the Shell, and the upcoming Alita: Battle Angel (2018). After transitioning from games and movies into industrial design, Vitaly has also worked on next-generation wearable products at Intel's New Devices Group as well as on surgical robotics at Intuitive Surgical. For the past 4 years, Vitaly has been working as the chief designer at Hankook Mirae Technology, the company responsible for building the first-ever four-meter tall mecha/robotic suit and currently developing a new humanoid and a quadruped robot. He also consults and works for Boston Dynamics, Panasonic, Microsoft, as well US military projects.