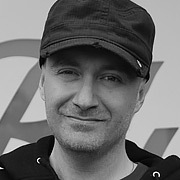 Alessandro Baldasseroni is a self-taught 3D artist specialized in character modeling and texturing. He started his career working as a generalist with a leading game developer in Milan, while also continuing to develop his personal portfolio based on high resolution characters and 3D illustrations. The international recognition soon followed allowing him to be featured on several international magazines and artbooks including Digital Art Masters and Ballistic Publishing's Exposé and Elemental. After freelancing for major studios in the game industry such as Massiveblack, Flagship Studios and Blur, he moved to California to join Blur as lead character artist. His professional work can be seen on several game cinematics, commercials and features including Star Wars: The Old Republic, Warhammer Online, The Force Unleashed, NFL on FOX, Halowars, Mass Effect 2, The Simpsons ride at Universal Studios, Dante's Inferno and many more.