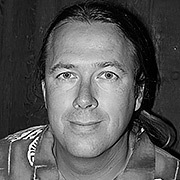 Darin Hilton works in film and television as a Matte Painter and Concept Artist. After graduating from Auckland University of Technology with a diploma in Illustration and Graphic Design, Darin emigrated from New Zealand to the United States to work as a traditional animator and storyboard artist. Before long he transitioned from analog pencil to the digital world, working initially as an Art Director at a video game company then moving into film and television effects. His credits include feature films such as The Nativity Story, Flags of Our Fathers, My Super Ex-Girlfriend, Are We There Yet?, The Day After Tomorrow, Queen of the Damned, Titan AE, T-Rex: Back to the Cretaceous and Tom and Jerry, as well as numerous commercials and television shows. Darin is currently working in Los Angeles on various film and commercial projects as a Digital Matte Painter.