In this workshop Ara goes through his workflow and creative techniques for ideation, concepting and designing a mech for a film, videogame, or VR project. As visual demands continue to escalate and project timelines shrink, the concept design phase in production has shifted to using 3D tools.

Ara goes through a 3D workflow using various tools and VR to sketch, refine, model and render a piloted combat mech used for personnel insertion or extraction, the MP9 PIX mech. The workflow begins with exploration and research of the specifications and designs for the mech and obtaining an overall vision 3D sketch. After getting approval of this milestone, the mech is then divided into functional parts and broken out into projects for each part, then the entire model is combined, and further detail is added.

The model is then taken into Substance Painter and textured. Then the mech is rendered into compositions and delivered to the production teams for design review and iteration if needed. Software and techniques used by Ara include block-out sculpting in Oculus Medium, Modeling sculpting and retopology in ZBrush, utilizing 3D Kitbash libraries to add detail. Finally, the model is rendered in Keyshot and color corrected and composited in Photoshop. 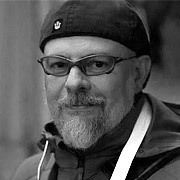 Ara Kermanikian is a concept designer with a focus on sophisticated futuristic character, vehicle, and set design for film, games, television, advertising, VR worlds, and 3D prints. He is particularly fond of designing futuristic mechs, cybernetic enhanced creatures and robotics. Ara is currently contracting with clients in the entertainment, scientific and design industries and working on his second book, Polysculpting via Design Studio Press. His work has been showcased in various publications including 3D Artist magazine, Nuthin' but Mech, editions of Mastering Maya and Introducing ZBrush. He is also a visual storytelling, 3D modeling, animation, and character design educator at Art Center College of Design and OTIS College of Art and Design.